Summary of the first 5 months of the HydroCobotics Project

The first 5 months of the 9 months research aimed at automating the environmentally friendly plant production process based on hydroponics focus on creating a safe environment for close human-robot cooperation.

The implementation of the project required modifications to both the hydroponic equipment and the cobot. These transformations were the following:

The upper levels of the hydroponic equipment are to be rotated by the cobot so the tower had to be redesigned to facilitate rotation. The tower tank received a cover and a ball insert, and the lowest level of the tower has been extended with handles in several iterations. The handles provide both humans and robots the possibility of rotating and latching/positioning.

The main objective of the project is to enable the cobot to insert and remove plants from appropriate places in the growing tower, in compliance with safety regulations and regulations. Clips have been created in several iterations for the task, so that the cobot does not directly hold the stem of the plant, but rather it holds the multifunctional plant holders (clips) designed for this purpose. 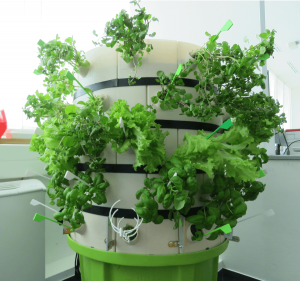 In addition to producing real test plants, 3D printed artificial plants have been developed to create repeatability for the tests. Artificial plants combine the biological properties of lettuce, watercress and basil. This allows the tests to model several real-world problems resulting from the different shapes of plants. Our team makes the artificial plant printing guide available to everyone, so that the tests can be carried out by independent parties.

Safety in the shared work of humans and robots plays a key role in the HydroCobotics project. A risk analysis sample has been prepared for the appropriate management of the subject area. The analysis summarises the sources of hazards that may arise during operation on a standardized basis. On the basis of the results of the analysis, the necessary modifications were fed back to the components of the cobotic growing cell. In the subsequent iteration of the analysis, the hazard values of the parts and the operating processes were found to be within their limit values.

In accordance with project commitments, the test cell includes the proposed gripping accessory and the active finger probe test piece for general use in cobotic systems. Selecting from potential passive and active designs, the gripping accessory is an active solution in its current state, partially decoupling the robotic arm and its end effector at the signal of an external system, such as a sensor built into the finger, wrist or other parts, thereby reducing the dynamic and static load on the object or person potentially involved in the collision. The gripping accessory may present a substantial value, thus the design also incorporates the need not to be fully decoupled. The finger probe can be a tool for system inspections to be carried out regularly during operation, providing in situ testing for the most critical impact situations, such as potential finger crushes. In its present state, the test piece uses pressure-sensitive films with the possibility of further development. The functional test piece and its development process provided useful feedback to clarify the requirements of the device, implementing the function in a more properly targeted manner and also to develop future designs that are even more suitable for use.

Thanks to the results of the targeted project activity, a full-scale cobotic growing cell has been set up, which can be operated in accordance with the objectives. Using the cell, the check on the selected test protocol was performed and the development of a new protocol has been started.

Up-to-date information about the project is available on the project website and linkedin page.